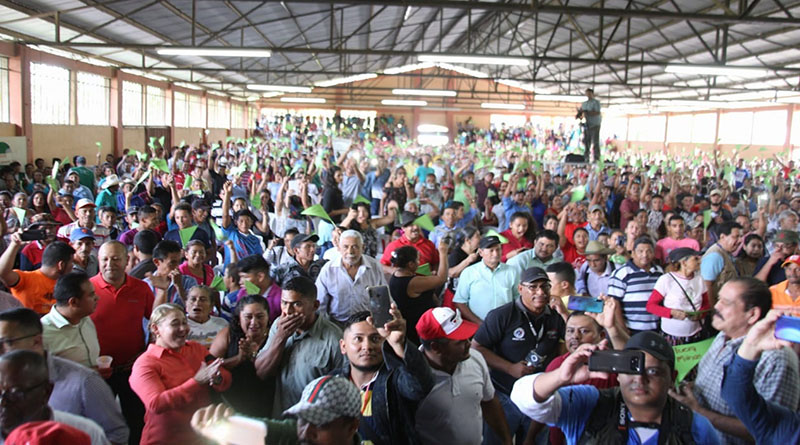 Tegucigalpa - The town hall through which the municipal corporation of Tocoa declared its territory, located in the department of Colon, free of mining activity, caused the residents' frustration because the local authorities excused themselves from making decisions around the conflicting project of the company Inversiones Los Pinares.

Far from listening to the community´s demands, the town hall meeting generated disagreements between political leaders and residents who described the declaration as a demagogic act of the part of the Liberty and Refoundation Party (LIBRE). The open council was led by the municipal corporation of Tocoa, headed by the mayor Adam Funez; the coordinator of LIBRE and former president of Honduras, Manuel Zelaya Rosales, and Members of the Legislative Assembly belonging to LIBRE.

During the town hall, only the statements of the members of the head table were heard and the participation of local citizens was ignored. Once the meeting was over, the mayor and the deputies and former president Zelaya, left the place without responding to the demand of the residents who requested the cancellation of the Los Pinares project, which is generating a deadly conflict in the community of Guapinol.

In statements to the press, MLAs of LIBRE said that the resolution of the conflict with Inversiones Los Pinares company goes through a decision in the National Congress.

The political lack of will and the power of economic interests has led the inhabitants of Tocoa to present a citizen´s initiative before the National Congress to demand the cancellation of the concession of the mining project. In the recent past, they have also presented several unconstitutional challenges on the concession.

Community leader and member of the Municipal Committee in Defense of Commons, Adilia Castro, described the town hall meeting as a violation of municipal autonomy and the imposition of a partisan activity of LIBRE. She regretted that Zelaya Rosales came to impose the candidacy of Funez and not to seek a solution on the illegality of the mining concessions granted in Tocoa.

“It is a lack of respect what has occurred in this municipality today, we do not accept it, we reject and condemn that Mel Zelaya, the LIBRE coordinator has come to play that role. It is shameful and humiliating for this town of Tocoa, we have voted for them and today they come to turn their backs on us and to support Adam Funez, a mayor who betrayed the people of Tocoa since he came to the government,” said Castro.

Castro said that the people of Tocoa have been faithful followers of LIBRE because they had considered that represented the opportunity for change.

“I want to tell Mel Zelaya that he was wrong with this town, we are a people with dignity and we are going to get to Inversiones Los Pinares. We will also require Adam Funez to leave this municipality, because he does not represent us, ”she said.

Esly Flores, also a member of the Municipal Committee in Defense of Common and Natural Assets, described the development of the open town hall as a small achievement, and the agreement whereby Tocoa was declared free of mining, as a new step in the fighting process. Flores agreed with Adilia Castro that there was a lack of respect for the community, and in particular for the Municipal Committee for the defense of the Commons, by the municipal corporation. Far from responding to the demands of the community, Flores believes that the interest of the municipal mayor's office and the LIBRE Party is to protect the interests of Inversiones Los Pinares mining company, owned by Lenir Pérez and his wife Ana Facussé, daughter of the landowner Miguel Facussé.

The concession, granted in 2013 to the ASP I and ASP II mining project, directly affects the waters of the Guapinol River. The company benefiting from the concession has installed a site for the processing of minerals that the mining project will generate. According to corporate statements, the business group has the mission of converting the site, installed under the business name Ecotek, into the largest Central American steel production company.