Xenia Marroquìn: “Water is not a merchandise, it is a human right” 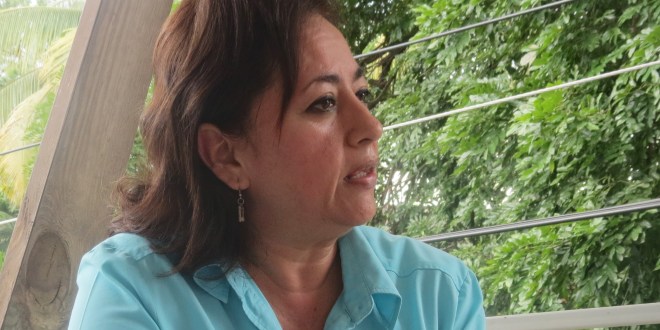 Xenia Marroquìn, coordinator of Foro del Agua, regrets the decision of the Constitutional Commission to refuse the proposal to reform article 69 of the Constitution, which proposes to recognize food s and the access to water as a human right.

This is deplorable. We, as organizations and social movements, are going to denounce it, and will be holding the members of parliament accountable. The problem is that they consider water as a merchandise and not as a fundamental human right.

What do you think of this decision?

It is such a shame. This decision is a regression and a terrible mistake to archive the request to reform article 69 of the Constitution.

The Foro del Agua, organized communities and the Alianza Ambiental have developed campaigns to support the ratification of this article that recognizes water and food as a human right.

What do you think of this decision?

This is serious and as organizations part of this social movement, we are going to demand, denounce, and hold the decision-makers accountable.

Why? Because they are leaving the whole process of consultation without validity.

How does this decision differ from your original objectives?

It is a terrible regression, we the Foro del Agua, have been working on that proposal since 2006. We formally proposed changes in 2008 before the Legislative Assembly took place. We then took part of a negotiation process that started in 2012 and that was agreed on by all the political parties. Even if the documents contained points we disagreed on, we came to an agreement with all parties to reform the article 69 of the Constitution.

We also fought to recover it in April 2015, when, a fraction of the FMLN put forward a procedural exemption, to save all the years of struggle threatened to go to waste.

What can you do now?

We solicited a meeting with the Legislative Commission Constitutional Amendments - still unanswered - but we are insisting, we want to strongly advocate for this reform, and as a people we are going to demand this publicly.

Does this initiative have detractors?

Yes, it does. This issue raises water and food as fundamental rights at a constitutional level. As such, it threatens powerful economic groups. But to us, it is vital to make such changes to improve the life quality of the majority, who at this time are deeply affected.

It is a regression, and a terrible mistake, because this decision is affecting the whole country. During our campaign “Por mi Derecho al Agua”, we achieved the support of the UN Special Rapporteurs on Access to Water and Food as human rights. It motivated us that we had the support of the international community that also called for the ratification.

We too often forget that El Salvador holds a seat at the U.N Human Rights Council, which is contradictory to this whole situation. Indeed, we cannot be appointed as protectors of international human rights, and at the same be violating the rights to water and food.

What will happen at the international level?

For now, we are preparing different actions at the international level, we can go before the Inter-American Commission on Human Rights (IACHR). On the national level, we are soliciting a hearing with the executive government, we hope to be allowed the space to move on with our plan, also on the legislative level.

Refusing this proposal of constitutional reform sets us backward in matters of human rights, which are fundamental to lead a dignified life.

What is the state of affairs of the General Water Law?

As the Foro del Agua, we have always supported regulation under an overarching law on water. But there are economic interests that are preventing any advancement.

There are 93 articles already negotiated - completed by the previous legislation- we believe water management is fundamental, this is why it should be administered publicly.

Water should not be seen as a merchandise, this is the current problem in a country where water is poorly managed. Today, a great inequality enables a few people to own the whole lot of water resources at the majority’s expenses.

This is why the objective is so crucial, if we don’t have an institution to ensure the sustainable management of water, those trading water will be the only beneficiaries.

How is it possible that 30,000 families located next to the San Antonio power plant are threatened by power shortages, while the companies that exploit the resources are trading electricity and using the resources in an unequal way without any regulation?

There is an alarming situation in the Eastern part of the country, where the river flows have decreased to drought levels. At the same time, companies can still drill wells, deforest, dry out underground aquifers and continue to work without an afterthought, while thousands of families are without water, forcing very poor people to buy 4$ kegs because water sources are empty. This is unfair.

What can we say to revive the discussion on the General Water Law?

We are calling upon those who have been appointed by the Salvadoran people, the members of the parliament, and urge them to really protect the rights of the population.

This is not an issue of political parties, it is a problem that affects each and every one, including the members of the parliament. For now it is not a problem for the whole country, but maybe one day it will be.

We urge the members of the parliament to discuss the issue of the vulnerability of water. They can start by recognizing access to water, water sanitation, and food security. We ought to stop blaming climate change. Lack of water in some places really is linked to an unfair way of distributing it. The members of the parliament cannot continue thinking of expanding social inequality gaps for the sake of voracious capitalism.