In 2000, the Pacific Rim mining company intended to employ 450 families in the Department of Cabañas, north of El Salvador. Although the mining project was in its exploration phase, the company closed its facilities in 2017 due to the approval of the Law prohibiting metallic mining. Following the expectations of a local sector to improve the living conditions of the area, local organizations began training processes in organic agriculture. Through these activities, more than 1,000 families have been trained during the last seven years. Currently, 250 families are active in the production of home gardens for family consumption and 25 are able to produce for local sales. For the participants in these initiatives, this type of process has improved family finances as well as diversified their nutritional intake. This is an illegal act by the mining company, as it’s mining contract has expired more than a year ago, and it does not have any permit to operate from the local governments.

Our alliance also denounce the alleged order of DILG Sec. Ano instructing the PNP to escort the illegal entry of the fuel trucks. About 30 elements of the PNP from Nueva Vizcaya accompanied 50 security guards of the mining company to deliver the fuel.  Local barangay officials and environmental groups from the area tried to prevent the illegal entry, but the police allegedly threatened protestors they will be arrested.

We are deeply frustrated that the Mines and Geosciences Bureau (MGB) of DENR has failed to implement the closure and decommissioning protocols for the Didipio mines, in light of the expiration of OGPI’s Financial and Technical Assistance Agreement (FTAA).   We hold the DENR and the MGB as accountable for the continued destruction of the forests and livelihoods of affected communities in Nueva Vizcaya, especially in light of the floods and landslides brought by the recent typhoons.

This illegal entry of fuel to the mines add insult to injury, as OGPI prevented the provincial government from opening an alternate road in Kasibu town, after the main road was made impassable, because of the overflow of the mine tailings pond.

We demand that DILG Sec. Ano immediately revoke any order to the PNP to escort fuel deliveries to the Didipio mines.  The DILG and the PNP should not be used nor be part of this illegal activity of OGPI.

We demand that the DENR immediately disclose the Final Mine Rehabilitation and Decommissioning Plan (FMRDP) of the Didipio mining project, so the LGUs and affected communities are properly informed about these protocols.

We remind President Duterte that he himself recognized that the deforestation in the mountains of Sierra Madre is the main cause of the devastating floods in Isabela and Cagayan.  Pres. Duterte must instruct the DILG and the DENR to immediately stop the illegal activities in Nueva Vizcaya.  # 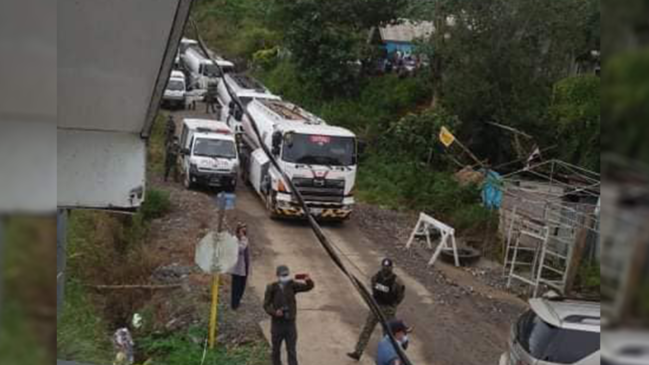 The fuel tankers were escorted reportedly by about 100 elements of the Kasibu Municipal Police. This was the second time it happened after the violent dispersal of barangay Didipio’s people’s barricade on April 6, 2020.

Leon Dulce, national coordinator of Kalikasan PNE, said that the mining operation of Oceanagold was reported to have contributed to the massive flooding in Cagayan Valley early this month after the onslaught of #TyphoonUlysses.

The Oceanagold’s trespass was a direct violation of the restraining order issued by the provincial government of Nueva Vizcaya after its continued operation in July 2019 without permit. The Financial and Technical Assistance Agreement (FTAA) of the mining company expired in June 2019.

“We demand for an immediate watershed audit that will investigate and penalize these extractive and destructive projects that worsened the massive floods that came with the series of typhoons leading to ‘Ulysses.’ The government agencies that have played a role in maintaining the business as usual operations of these mines must likewise be probed and held to account,” said Dulce.

A group of scientists from Agham conducted an environmental investigation mission in 2014 in the mining community and found damages to forests, and air and water pollution linked to Oceanagold.

Environmentalists commemorate the 11th anniversary of the murder of Marcelo Rivera

On July 11th, environmental justice activists in El Salvador commemorated the 11th anniversary of the 2009 assassination of Marcelo Rivera, a community cultural activist and water defender from the small town of San Isidro, Cabañas, who died due to his relentless opposition to the El Dorado mining project, owned by Canadian Pacific Rim/Oceana Gold mining company.

The death of Marcelo, whose body was found inside an abandoned water well with signs of torture reminiscing of the brutality of the Salvadorian civil war, sent shock waves through the national and international anti mining movement and a clear message to local water defenders that pro-mining interests were willing to go beyond typical criminalization tactics to have the mining project up and running.  But far from intimidating anti mining activists, Marcelo´s murder galvanized an international movement led by local communities determined to push the company out of Cabañas, have the World Bank rule in favor of El Salvador in a lawsuit brought forwards by Pacific Rim, and have El Salvador set up an example around the work as the first country to completely ban metal mining activities in its territory.

Arrests, harassment of environmental defenders amid COVID-19 Pandemic in the Philippines We in the Kalikasan People’s Network for the Environment (Kalikasan PNE) request your support for recent human rights violations directed at Filipino land and environment defenders in the midst of the COVID-19 pandemic. These violations are characterized as occurring in a time when the capacity of defenders to assert their democratic rights are severely constrained by lockdowns, arbitrary arrests, and other heavy-handed measures supposedly meant for containing the outbreak of the infectious disease.

On March 19, 2020, indigenous people leader Gloria Tomalon was arrested by the Philippine National Police (PNP) on charges of serious illegal detention and kidnapping. These are trumped-up charges meant to silence her activism. Gloria was also labelled as a leader of the New People’s Army (NPA), the armed wing of revolutionary group Communist Party of the Philippines (CPP).

Gloria is the chairperson of KATRIBUMMU, a Lumad (indigenous people in Mindanao) organization. She and her organization have been vocal in resisting the attempts of five large-scale mining companies to enter and operate in their ancestral lands and forests in the Andap Valley Complex in Mindanao. The five companies were the Romualdez oligarchy-owned Benguet Corp., Abacus Coal Exploration and Development Corp., Chinese-owned Great Wall Mining and Power Corp., ASK Mining and Exploration Corp., and Coal Black Mining Corp.

Gloria Tomalon’s family has a long tradition of activism and environmental protection. She is the sister of progressive and indigenous legislator Eufemia Cullamat of Bayan Muna (People’s First) Partylist. Tomalon’s brother, Pablito Campos, was also arrested in February 2018 and was branded as a communist rebel. Another brother of her, Dionel Campos, was the chairperson of Malahutayong Pakigbisog Alansa sa Sumusunod (Mapasu) and was massacred along with two others by members of the government-affiliated paramilitary group Magahat-Bagani on September 1, 2015.

Aside from Gloria, there are at least 51 political prisoners previously working in environmental defense remaining in prison. This is despite the appeal of the UN High Commissioner for Human Rights on world governments to free political prisoners and low-level offence inmates to decongest inhumanely overcrowded prison facilities.

In the Philippines, human rights group Karapatan pointed out that jails of the Bureau of Jail Management and Penology (BJMP) and the Bureau of Corrections is 450% and 310% congested, respectively. News reports point out that at least 9 inmates and 9 personnel have already been found to be COVID-positive in the BJMP facilities.

On April 6, 2020, the PNP violently dispersed the People’s Barricade of indigenous Ifugao people in Bgy. Didipio Kasibu, Nueva Vizcaya. The people’s barricade was set up last July 2019 by indigenous people to stop the operation of the Canadian-Australian owned OceanaGold Corporation. The local people’s organizations have also raised concerns over the mine’s longstanding depletion and diversion of the community’s water resources, rendering them vulnerable to the COVID-19 outbreak.

The PNP escorted the entry of trucks carrying fuels in Bgy. Didipio for the operation of OceanaGold, and used excessive force to push away the human barricade. In the process, Rolando Pulido, chairperson of indigenous organization DESAMA was arrested and slapped with charges of ‘disobeying’ police officers. At least three other indigenous barricaders were injured during the violent dispersal by the PNP. Currently, Pulido is out on bail.

Gen. Parlade accused these organizations of soliciting financial and material support for CPP and their armed revolution in the guise of responding to the COVID-19 pandemic. These organizations are known nationwide in their humanitarian work and participation in successful environmental campaigns such as on mining and climate justice.

These repressive acts perpetrated by the administration of President Rodrigo Duterte and its state security forces are putting in danger the public health of communities by allowing environmentally destructive activities like mining. Suppressing the work of environmental defenders will affect the public’s much-needed access to water and sanitation, food and nutrition, and pollution control.

In these perilous times, we urge all fellow environmental and human rights defenders and our supporters to pressure Filipino public authorities to take action. Let us support our defenders in the Philippines against repression and encourage them to continue their advocacy for the environment and the people.

We invite you to send a letter of concern through mail, email, or fax calling for:

The Philippine Government to adhere and respect the Universal Declaration of Human Rights and all major Human Rights instruments that it is a party and signatory.

You may send your communications to:

President of the Republic We are greatly disappointed with this development.  ATM believes that OceanaGold Philippines, Inc. (OGPI) had failed to substantially comply with the requirements of a renewal for FTAA.

It did not inform the local governments about its application and has not secured the free, prior and informed consent (FPIC) of the affected indigenous peoples.

This interim renewal smells tragically as an attempt of DENR to circumvent the already vague and anti-poor Mining Act of 1995.

The DENR has made a mistake in implementing the minimum technical requirements for an FTAA renewal.  The requirements for FTAA renewal should have included a new environmental impact assessment (EIA) and  comprehensive proof that it has complied with the findings and recommendations of the Mine Audit in 2016 ordered by former DENR Sec. Gina Lopez.  A new hydrology impact study should have also been submitted by OGPI to dispel the claims of the LGU that te water supply has been severely reduced due to mining operations in the area.