From Mining to Water: 25 years of Community Solidarity and Organizing

by J. Alejandro Artiga-Purcell * - SHARE
Cabañas, El Salvador – This Saturday, in Victoria, Cabañas, over 900 people gathered in the blazing hot plaza to celebrate Radio Victoria and the Social Economic Development Association’s (ADES) 25th anniversary. The sister organizations hosted a joint community arts festival to mark two and a half decades of solidarity, support, and dedication to participatory community development, human rights and sustainability. 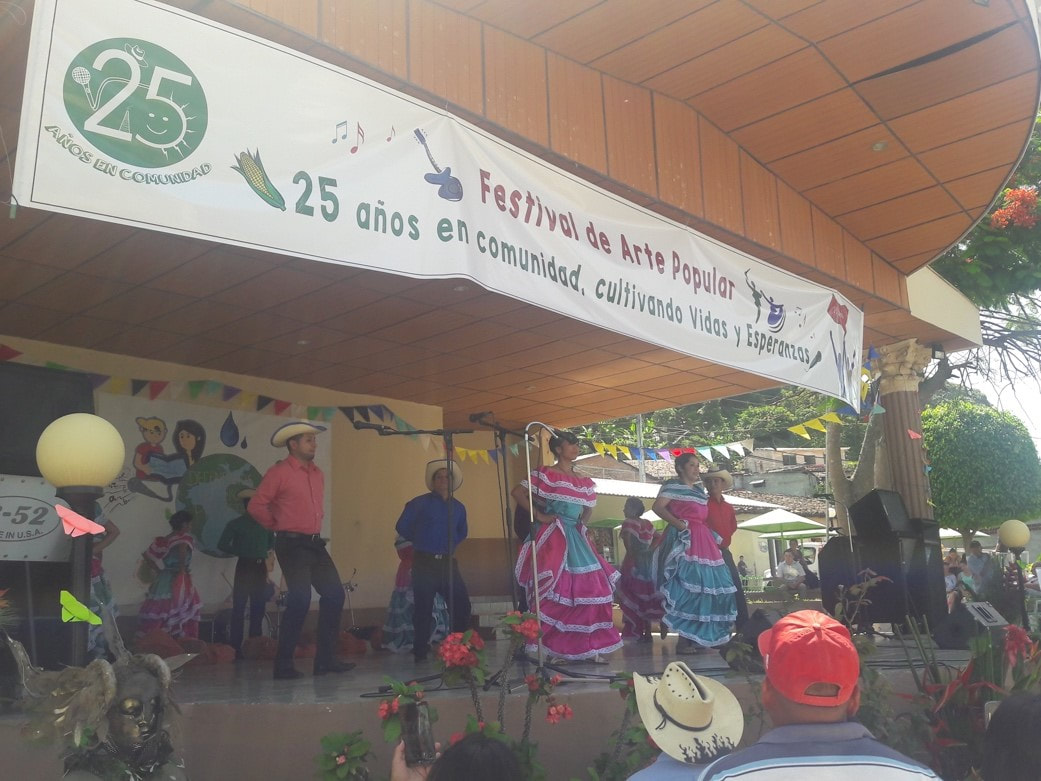 Traditional dance performance at the Community Arts Festival, Victoria, Cabañas (Photo by author).
Both organizations’ mandates originate in their struggle to repopulate the town of Santa Marta, Cabañas, at the height of the bloody civil war. Founded by community members on their return from Honduran refugee camps, ADES and Radio Victoria’s first challenge became building and maintaining the social and physical tools necessary for subsistence survival.

The speeches, live music, and community dance and theater performances celebrated both organizations’ blossoming successes over the years. The event, itself, reflected their extraordinary growth and community support as attendees came from municipalities far beyond Santa Marta, including those from other parts of Cabañas, Usulutan, San Vicente and Cuzcatlan. ADES and Radio Victoria’s projects expanded to include fostering literacy, environmental and human rights education, community health, microfinances, organic agriculture, leadership training, youth programs, and women’s empowerment.

An Historic Success
Their most public success began in 2006 with their resistance to a Canadian-Australian gold mining company (first Pacific Rim, then Oceana Gold) that threatened to contaminate the country’s water resources. ADES and Radio Victoria accompanied local communities to protest the proposed El Dorado gold mine near San Isidrio, Cabañas. The 12-year fight transformed a local outcry into a nation-wide movement with international support. Their organizing drive culminated in March 2017 when El Salvador became the first country in history to ban metal mining. 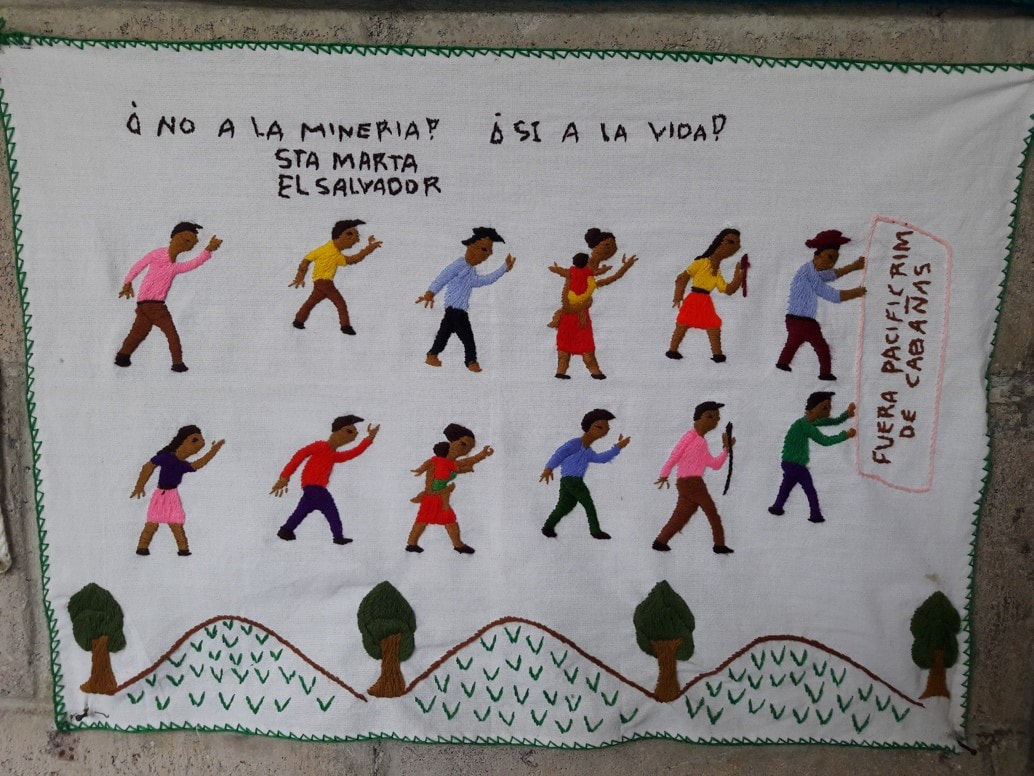 A hand stitched depiction of community organization against mining in Cabañas, hanging in the Radio Victoria office. (Photo by author).
The monumental victory was the result of unparalleled levels of local organization, dedication and sacrifice. Speakers like ADES President, Vidalina Morales, recalled the costs incurred along the way, including the unresolved assassinations of four anti-mining activists in 2009. Morales reminded those present that “We cannot talk about the 25th anniversary of Radio Victoria and ADES, and our successes, without remembering Dora Sorto, Ramiro Rivera, Marcelo Rivera, who gave their lives for the defense of our environment and the right to life of current and future generations.”

Morales also noted “new threats on the horizon that put at risk democratic aspirations, social justice, and the search for an ecologically sustainable society for the Salvadoran people.” Chief among these is the continued struggle over El Salvador’s water resources.

El Salvador’s Political Water Crisis
Facing a dire water crisis, predicted to get worse with the effects of climate change, El Salvador remains one of few countries without a general water law. Following years of pressure from El Salvador’s Foro del Agua, an umbrella group of environmental social organizations including ADES, the Ministry of Environment (MARN) submitted a proposed General Water Law to congress in 2012.

But not withstanding general consensus on 92 articles of the proposed Water Law, and just three months after the metal mining ban passed, El Salvador’s conservative ARENA party proposed their own water law, with the technical guidance of El Salvador’s National Association of Private Companies (ANEP). The regulatory entity of the ARENA/ANEP law consists of one executive representative, 2 representatives of COMURES (an ARENA dominated group of mayors) and 2 representatives of ANEP. While ARENA claims that their law is not privatization, a growing portion of Salvadoran civil society is concerned that putting water regulation under the decision-making power of private interests would be a de facto privatization.

In contrast, a counter water proposal presented by the Universidad Centro America Simeón Cañas (UCA) also in 2017, with supported by the Catholic Church, places regulatory control firmly in the hands of the state.

The ARENA controlled congress has momentarily cast aside MARN’s General Water Law in favor of their own. However, despite having the necessary votes to pass it into law, a wave of social protest regarding “who decides” about water regulation has since exploded as a point of contention on the national political agenda.

Rallies, marches, and public forums organized by students of the public University of El Salvador (UES), environmental groups, and labor unions have filled the streets of San Salvador. Protestors have taken over highways and airwaves of public and mainstream news outlets. The recurring demand is “no to the privatization of water” and no to the incorporation of ANEP in the regulating body.

A Community performance enacting the attempted privatization of water by ANEP. (Photo by author).
In his comments to those gathered in Victoria’s public square, Oscar Beltran, director of Radio Victoria, promised that, “Just like we did with the mining issue, we will assume the challenge against the privatization of water.” Later on, a community performance group reiterated this stance. The actors depicted ANEP’s attempt to commodify water (depicted by a suited man slapping a dollar sign on a young woman dressed in a water costume) and the power of an organized community to protect their “human right to water”.

Mining, Water and Community Organization
On June 5th, roughly two weeks before the 25th anniversary celebration in Victoria, ADES invited communities to commemorate the 9th anniversary of Marcelo Rivera’s martyrdom for defending the human right to water against transnational mining interests. On another hot Salvadoran morning, hundreds of people gathered in San Isidro’s central park for the event, titled, “Exigimos el Derecho Humano al Agua, No a la Propuesta Privatizadora de la ANEP” (“We demand the Human Right to Water, No to the Privatization Proposal of ANEP”). ​ 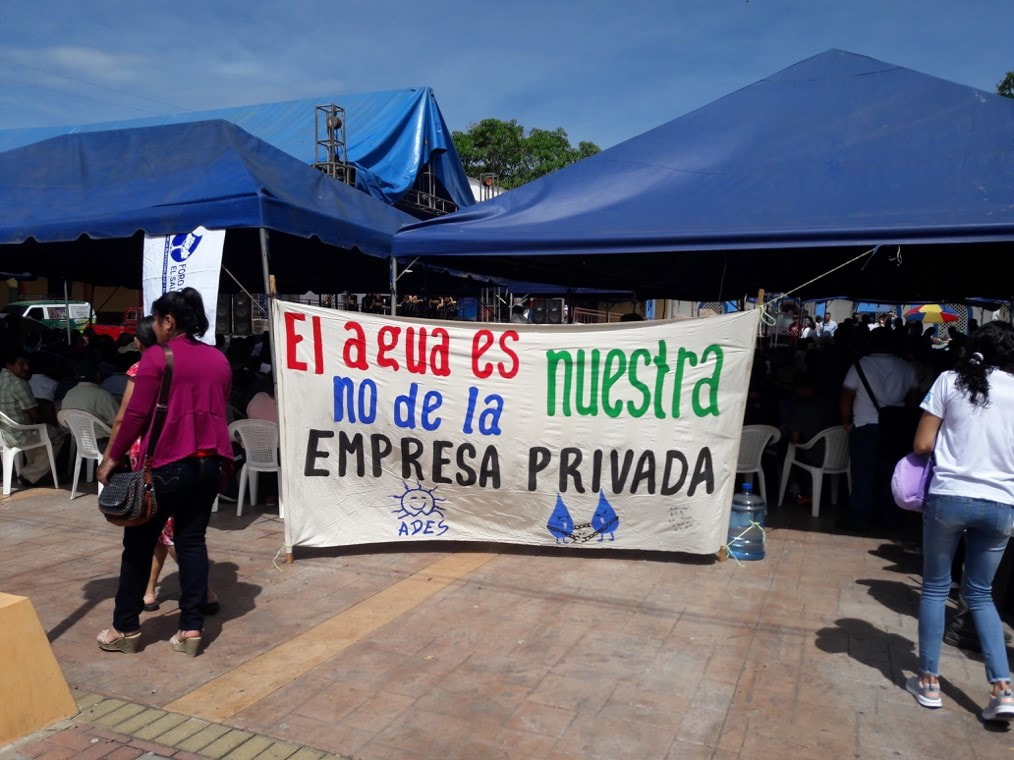 Banner at the ninth Anniversary of the martyrdom of Marcelo Rivera in San Isidrio, Cabañas. The banner reads: “The water is ours, it is not the private companies’” (Photo by author).
The events speakers included the Monseñor José Elías Rauda, Bishop of San Vicente, Ana Milagro Guevara, the Environmental Secretary General of the Ombudswoman of Human Rights, Omar Serrano, the Vice Rector of the UCA, and Ms. Morales from ADES. They spoke of water as a human right that supports all other human rights—including health, food, sanitation. They spoke against the privatization of a resource so vital to life. They also spoke of the power and necessity of the people to stand up for those rights at all costs.

Morales echoed these sentiments again this past Saturday. In reference to Marcelo and the other martyrs who stood against mining, she stated, “They will always be an example to follow.” An example that demonstrates that “only with organization and popular struggle do we guarantee the defense of our inalienable rights and interests as working people.”

*J. Alejandro Artiga-Purcell is a PhD candidate at the University of California, Santa Cruz department of Environmental Studies.
republished from: http://www.share-elsalvador.org/blog/from-mining-to-water-25-years-of-community-solidarity-and-organizing