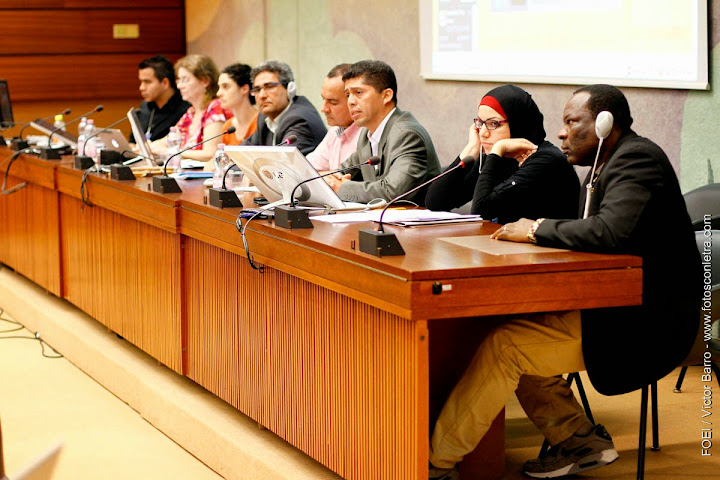 Members of the National Roundtable against Mining in El Salvador, La Mesa, announced the presentation of the Pacific Rim-OceanaGold case in this week’s Permanent Peoples' Tribunal held in Geneva, Switzerland.

The tribunal, organized as part of the International Week of Actions to Stop Corporate Impunity, “provides an opportunity to the victims of corporate violations to publicly present their struggle and to demand the justice that they have never achieved. More generally, it aims to provide a truthful and authoritative account of the operations of TNCs and their repercussions on human rights.”

The case of Pacific Rim-OceanaGold and the human rights violations the company has engaged in while in El Salvador was presented in Geneva by Saul Baños, a member of La Mesa and a lawyer with the Foundation for the Application of the Law in El Salvador-FESPAD.

Since 2005, La Mesa has conducted a successful campaign to stop the development of industrial mining operations in El Salvador. Their struggle has been credited as one of the main factors that led to a de facto moratorium on mining implemented by president Antonio Saca in 2008 and continued by the administrations of Mauricio Funes in 2009 and current President Salvador Sanchez Ceren.

The mining moratorium prompted Canadian mining company Pacific Rim, now owned by Australian miner OceanaGold, to sue the government of El Salvador under the international Centre for the Settlement of Investment Disputes, ICSID; to engage in high level lobby efforts with local and national authorities to get their mining permit approved; and to conduct a disastrous public relations campaign that engendered social conflict in the communities surrounding its El Dorado mining project in the northern department of Cabañas.

Our participation in this tribunal is on the eve of the “anniversary of the assassination of Gustavo Marcelo Rivera” declared Vidalina Morales from the National Roundtable Against metallic Mining. “Five years after his death, in June 2009, we are still expecting the Office of the Attorney General to fully investigate his murder, and others that occurred in the same period, and charge the intellectual authors of these crimes”

By June 2011, five anti mining activists had been assassinated and tens of others environmental defenders live, up until now, under continuous death threats against their lives and their families'.

The state of insecurity generated in Cabañas prompted the Inter American Commission on Human Right-IACHR to issue precautionary measures ordering the Government of El Salvador to “adopt the measures necessary to guarantee the life and personal integrity of the beneficiaries, and to inform the IACHR about any actions taken to investigate the facts.”

Locally, the then Human Rights Ombudsman of El Salvador, Oscar Luna, and Deputy Chief of Police, Howard Cotto, declared on separate occasions that the patterns of violence in Cabañas were not typical and that they were related to the presence of Pacific Rim in the region.

While the company continues to fully exercise its investor’s right to sue the government of El Salvador for over 300 million dollars under the ICSID, communities that have been victims of human rights violations in the department of Cabañas have no recourse to demand justice and reparation for personal injury, damages to property and violations to basic human rights.

The participation of La Mesa in the permanent people’s tribunal adds a significant voice to a growing international movement led by countries of the global south and hundreds of international civil society organizations that demand that the United Nations implement an internationally binding mechanism to hold corporations accountable for their involvement human rights violations.

“The Tribunal will examine cases that confirm that the United Nations’ present Business and human rights regime, which relies on voluntary guidelines rather than legal obligations, is woefully inadequate to deal with ongoing corporate violations.” Reads a press release issued by the Campaign to Dismantle Corporate Power.

A statement outlining the human right violations of Pacific Rim-OceanaGold has also been submitted to the United Nations Human Right Commission by the Institute for for Policy Studies and the Centre for International Environmental Law, international organizations that work in partnership with La Mesa.

The submission to the UNHRC adds to a growing number of cases that evidence multinational corporations’ contempt for democratic and human rights. Other cases include: Oil pollution caused by Chevron in the Ecuadorean Amazon and Royal Dutch Shell in Nigeria; cases of mining giants such as Glencore in the Philippines, Peru, Colombia, the Democratic Republic of Congo and Zambia; the systematic violation of human rights by the Coca-Cola Company in Colombia and Israel’s water services company Mekorot in Palestine; and others. 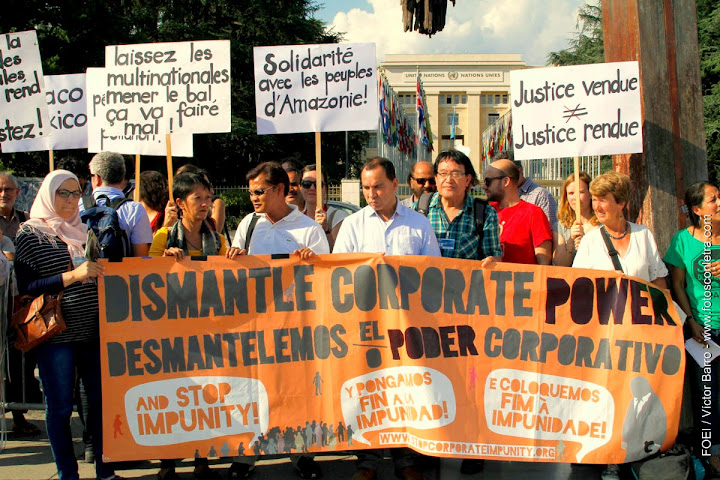