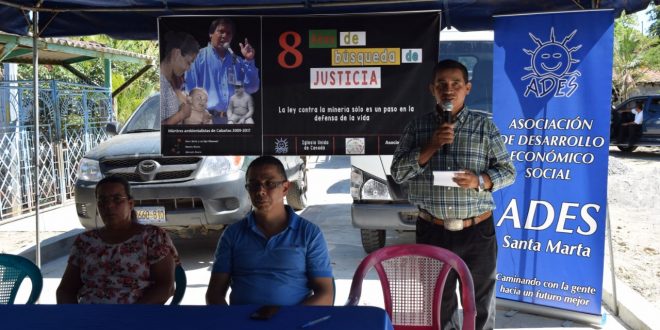 Although there is a law against mining, fear is always present. “OceanaGold still owns the El Dorado miming project, and they are only waiting for a change of government for it to be installed again", said Domingo Miranda, at the commemoration ceremony of the eighth anniversary of the murder of environmentalists in San Isidro, Cabañas.

Eight years after the murders of Marcelo Rivera, Dora Alicia Sorto (who was eight months pregnant) and Ramiro Rivera, committed between June and December 2009, relatives and members of La Maraña Environmental Association, ADES and the National roundtable against Metallic Mining still demand justice.

The Association for Social Economic Development (ADES) along with relatives of the victims paid homage to the victims in the community Trinidad, Sensuntepeque, Cabañas. A Holy Mass was celebrated, followed by a political act to commemorate the life and struggle of environmentalists, murdered for opposing the El Dorado mining project owned first by Canadian Pacific Rim, and now by Australian Oceana Gold.

Pacific Rim/OceanaGold filed a claim for  $250 million US, to the Salvadoran State in 2009, in order to obtain a permit to operate the El Dorado mine in San Isidro, Cabañas.

The complaint was filed with the International Center for Settlement of Investment Disputes (ICSID), a World Bank-entity based in Washington DC, in the United States. The dispute lasted seven years. In October 2016, the ICSID ruled against the mining company and required a payment of 8 million dollars in favor of the Salvadoran State.

Marcelo Rivera, at the time of his disappearance, served as director of the House of Culture in San Isidro, Cabañas, as legal representative of the Association Friends of San Isidro Cabañas (ASIC), a leader of the National Roundtable against Mining Metallic and a member of the Departmental Board of the FMLN.

Ramiro Rivera, community leader, farmer by profession and father of two children, was later killed by several people who ambushed him when he was driving in his vehicle along with two police officers who gave him protection, but failed to protect him. The gunmen used professional M-16 rifles.

Dora Alicia Sorto, eight months pregnant at the time, was killed while she was in a nearby river washing clothes. She was intercepted by a group of men: they murdered her when she was returning home with her youngest son, who also got injured by a stray bullet.

According to Miguel Rivera, brother of Ramiro Rivera, the work that environmentalists have done in resistance to Pacific Rim's plans has been minimized and linked to gang problems. "The attorney general’s office did not want to investigate, but communities know how the events happened and who are responsible," he said.

Rivera also demanded for the truth to be revealed, since "this case represents an eight years debt to the community and authorities must be reminded that people do not forget and that we demand that each of the facts of the three cases be clarified".

He also indicated that the problem of mining in El Salvador continues, that is why they must always be ready to fight for the respect of the right to life and apply the prohibition of mining in order to assert the rights of the victims.

The current president of the Environmental Association La Maraña Domingo Miranda said that their group was founded after the murder of his colleagues. The association began working to stop mining projects as well stop a project providing water containing heavy metals to the community, an initiative led by the mayor Sensuntepeque. Miranda said that the communities experience fear due to the presence of people who once worked for Pacific Rim and were involved in the murders of the three environmentalists.

He also expressed that El Salvador is the first country to have a law that prohibits mining and stop projects that affect the environment which represents one of the greatest achievements of its communities.

On the other hand, Pedro Cabezas, representative of the International Allies, reiterated the group’s commitment to accompany the Salvadoran people, especially the communities threatened by OcenaGold such as La Maraña, San Isidro and Trinidad, to denounce the imposition of mining companies in the country.